Sale on canvas prints! Use code ABCXYZ at checkout for a special discount!

The release of Olympic, a rehabilitated American Bald Eagle, back to the wild.

Previous Next View All 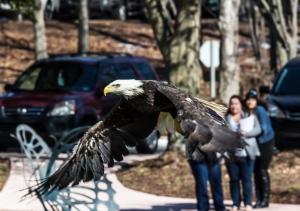 This past Saturday, I had the privilege, along with about 100+ other observers, to witness the release of a rehabilitated bald eagle, named Olympic, back into the wild. As Olympic took off from the clutches of its handler you could sense this magnificent bird�s joy as it freely flew off into the afternoon sky. The release took place at the Duke Energy , McGuire Nuclear Station�s Energy Explorium. The bald eagle was rehabilitated at the Carolina Raptor Center�s, Jim Arthur Medical Center. It came to the Carolina Raptor Center from Maryland in November, 2013 with broken bones in the wing, along with soft tissue and feather damage.

The Carolina Raptor Center is located at 6000 Sample Rd, Huntersville, NC. It has 23 species of raptors and over 100 individual birds. It is one of the only centers in the southeast that rehabilitates and exhibits the American Bald Eagle. For those of you who live around the Charlotte area, I would encourage to make a weekend trip to the center to see the raptors.